Beginning his 35th year of college teaching, Chris Dreisbach is Faculty Lead and Director of Applied Ethics and Humanities for the Division of Public Safety Leadership in Johns Hopkins University’s School of Education. He is Professor of Moral and Systematic Theology at The Ecumenical Institute of Theology, St. Mary’s Seminary & University and Pocono Community Pharmacy, where he has taught since 1992. He is a frequent lecturer on ethics for federal, state, and local law enforcement agencies; and on moral and systematic theology for local church groups. And he is a priest in the Episcopal Diocese of Maryland, ordained June 26, 2013 and assigned to Old St. Paul’s in Baltimore as an assisting priest. Chris taught full time at Villa Julie College (now Stevenson University) from 1980 to 1992, and College of Notre Dame of Maryland from 1992 to 2004, leaving as a tenured full professor. Chris received his MA in 1981 and his PhD in 1988 from Johns Hopkins University. His three most recent books are Ethics in Criminal Justice (McGraw-Hill, 2009), Collingwood on the Moral Principles of Art(Susquehanna University Press, 2009), and Ethics in Social and Criminal Justice (Bridgepoint, 2013). Chris has lived in Baltimore, MD, since 1979. He is married to Rebecca Giordano Dreisbach; has two daughters, Abbey and Anna; two granddaughters, Mia and Caroline, and a step-son, David. Rebecca and David are also members of OSP.

Mary grew up in Texas, attending St. John’s Episcopal School in Dallas. After graduating from Texas A&M University in 1987 with a Bachelor of Science Degree in Psychology, she moved to the San Francisco Bay Area where she lived for seventeen years, working as a Youth Minister, Director of Christian Education, and priest. Mary Luck and Mark Stanley were married in 1989. Sponsored for ordination by the Episcopal Diocese of California, Mary went to seminary at the Church Divinity School of the Pacific, graduating in 1997 with a Master of Divinity Degree. Mary was ordained priest in 1997 at Grace Cathedral in San Francisco, and then served as Assistant Rector at two Bay Area churches. Mary and Mark were blessed with the birth of their twins, Jack and Hannah, in 1999. The family moved to Baltimore in 2004 so Mark could begin working as the Rector of St. Paul’s Church. In 2006, Mary joined the staff at St. Paul’s and is currently serving as Co-Rector. With thirty years of experience developing ministries in the Episcopal Church, Mary says, “We cherish people so they will know they are cherished by God.” 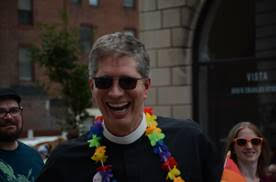 The Rev. Mark Stanley loves being a parish priest and he has been honored to be the Rector of Old St. Paul’s Church since 2004. Mark is a lifelong Episcopalian who was born in Evanston, Illinois. He graduated from The University of Texas in Austin as a Philosophy Major in 1986. He went to seminary at The Church Divinity School of the Pacific in Berkeley, California and was ordained transitional deacon in 1990 and then priest in 1991. Before coming to Baltimore, Mark served as the Rector of Christ Church in Sausalito, California. He enjoys serving on the Boards of St. Paul’s School and Saint Paul’s School for Girls in Brooklandville. He is married to The Rev. Mary Luck Stanley and they have two teenage children, Hannah and Jack. Mark enjoys running, the Ravens, watching movies and playing with his dog, Dash.

Sign up to receive weekly E-pistle updates by sending your email address to office@stpaulsbaltimore.org

The Church is located in downtown Baltimore at the corner of N. Charles Street and Saratoga and is four blocks north of Harbor Place and the Convention Center:
233 North Charles Street
Baltimore, Maryland 21201
view map >
Free parking for Sundays and major holidays is available at the St. Paul Place Garage.

You are welcome to support our mission by making a Pledge, or if you are interested in volunteering, we’d be grateful for any time or resources you can give.